This year another group of young sailors from Poland once again participated in the International Sailing Camp and Regatta in Qingdao, the largest Sailing Center in China. In 2017 ISSA (International Sailing Schools Association) singed an agreement with the city authorities (Qingdao) for the exchange of youths. Under the contract, Poland has also hosted Chinese sailors already twice. 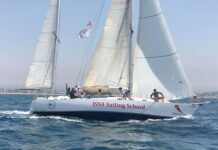 ABOUT US
ISSA aims to provide opportunities worldwide for people who dream of learning to sail to make a start in a sailing school. Also, ISSA provides an international career path for sailing and windsurfing instructors to teach sailing and windsurfing in other countries.
Contact us: issa@sailingschools.org
FOLLOW US
© Copyright 2017 - ISSA GLOBAL